Where Do I Get My Ideas? The ORACLE


Whenever I'm in a dry spell and I need something to jump-start my writing, I do what the ancient Greeks did when they needed a spiritual boost: I visit the ORACLE.

The ORACLE stands for: Outrageous Ridiculous And Crazy Literary Exercises.  To the untrained eye, it looks like old, wooden box shaped like a treasure chest.  Like this: 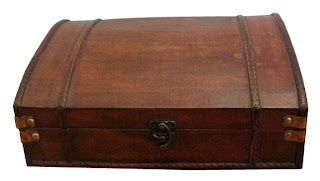 But when you open it, there's tons of stuff inside to help me start writing.  While the contents of the ORACLE tend to change from time to time (I take stuff out and put new stuff in), there are some staples that stay the same.  Here's a sampling of what my ORACLE looked like a few months ago. 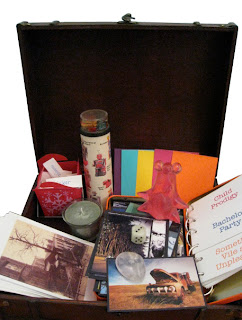 Stuff that's in the ORACLE right now:
Of course, the ORACLE--being a bulky wooden box--isn't exactly conducive to writing on-the-go.  I've since also created a PORTACLE (portable oracle) that includes just a handful of postcards with prompts on the back, a Beat Sheet Cheat Sheet, dice and an un-sharpened pencil (to symbolize all the writing that I have yet to do).

So, yeah, when it comes to thinking up ideas, I have no excuses with an ORACLE like this at my fingertips.  All I can do is choose something at random and start writing.
Posted by Gabriela Pereira at 1:37 PM 2 comments:

Where Do We Get Our Ideas

Juggling the changes that need to be made in my "finished" novel and putting the details into a biography I"m working on, seem to be more than enough to think about. However, there are those ideas out there, intruding like some computer virus - ideas about a children's bok based on a funny incident with a dog in front of our local deli, or the amazing story of a woman I talked to who uses public transportation to travel the city in a wheel chair, a group of giggling Japanese girls who brought back memories of my three years in their country, and, of course, the daily papers and their stories of the state of the world. Those articles send me into essay mode even though many of them seem more like fiction. It's sorting out all the images, conversations and memories that become the challenge and the joy of writing it down.
Posted by Jo LoCicero at 7:04 AM No comments:

What Sparks Our Ideas Part II

In many ways, life is boring. But that doesn't mean you have to be boring along with it. Being bored is the perfect opportunity to let your mind wonder and get creative.
And my ideas are always sparked by other creative people. Whether it's a musician, artist, or a favorite author, my best writing days usually come after I spend time listening to, watching, or reading other artists do their thing. Great artists always spark ideas you can relate to or give you something you can build on. Which brings me to the truth.
None of my ideas and creative sparks would work without the truth. Even though I'm making up a story, if there wasn't some semblance of truth to it, it wouldn't be believable. Good writing mixes honesty with characters that have a unique view of how to deal with what they're being put through.
So start writing some creative truths!
Posted by Dave Symonds at 8:00 AM No comments: 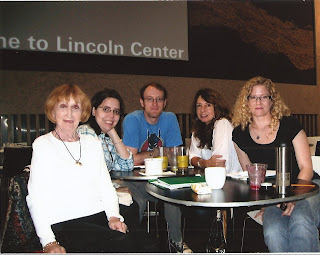 The members of Quill and Coffee have varied over the years, but one thing is for sure: you can find us at the David Rubenstein Atrium in Lincoln Center, NYC every Tuesday morning discussing our latest and greatest writing projects.
From left to right:
Jo, Gabi, Dave, Debra, and Julie.
Posted by Dave Symonds at 8:00 AM No comments:

What sparks our ideas?

This month, we decided to talk about where our ideas come from. I jumped on this one because for me, that's the easy part!
I get my ideas from all over the place. My family, friends, (always changing the names and specific circumstances to protect the innocent, and not make a lot of enemies) songs, tv, movies, Facebook drama, newspaper articles and one of my favorites, The New York Times obituaries! I know that may sound a bit disturbing, but every day, they publish the stories of two or three people who have done amazing things. Musicians, politicians, scientists, the list goes on and on.
No, the hard part for me is not coming up with the idea for the beginning of a story or character, it's what happens next...but that's another post.
Posted by Debra Rosenberg at 2:56 PM 1 comment:

Why do we write? It is the journey into the unknown, but one of our own making. Characters, situations, even cities, countries and outer space, are there for the making. The experience of wondering what the characters will do and say becomes the reason for turning on the computer. These characters take up residence in our heads - are with us before we go to sleep and there when we wake up. It is, we hope, the joy of taking others with us on this journey that keeps us going.
Posted by Jo LoCicero at 1:35 PM 1 comment:

When people ask how I got into writing, I jokingly say that I was always really good at typing and figured I’d put that skill to good use. But in reality, I became a writer thanks to my grandma, a troublemaking cartoon six year old and a purple crocodile.

My grandma worked at The Coop, Harvard’s official bookstore. Every birthday as a kid, instead of giving me intellectually stimulating books from the world’s most prestigious university, I could always count on unwrapping either a Calvin and Hobbes comic book or a collection of children’s poems by Jack Prelutsky.

Growing up, I simply couldn’t understand why anyone would read anything other than Calvin and Hobbes books. Reading about the misadventures of Calvin and his tiger was like getting to eat dessert for every meal (which, quite frankly, would have been perfectly ok with me). It was great writing paired with hilarious pictures. Entertainment in its purest form. I knew then that I wanted entertain people in some way and make people laugh because of something created. I just needed to figure out how.

I found my answer after reading a collection of Jack Prelutsky poetry. The poems were funny and imaginative (my favorite being My Neighbors Dog is Purple) and I loved seeing how he rhymed words and phrases as if they were born to be together.

So now I write. Sometimes the words rhyme and other times they don’t. But they are always meant to entertain, make the reader laugh, and maybe one day inspire someone to say, “I’d like to do that too”. 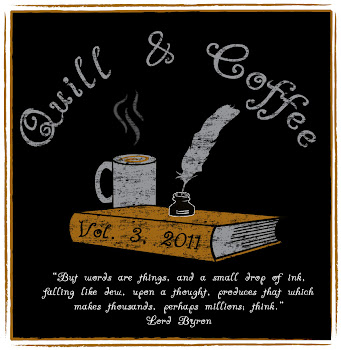